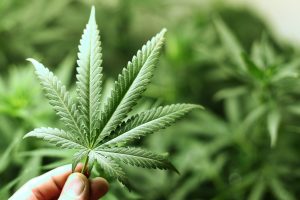 In Tennessee, if you are found to be in possession of over ½ ounce (14.175 grams) of marijuana you will most likely be charged with violating TCA 39-17-417, Possession of a Schedule VI with Intent to Manufacture, Deliver or Sell, a Class E Felony, which carries 1-6 years in prison.  However, you may not be guilty of this crime, a felony, despite the weight of the marijuana being greater than 14.175 grams.  The reason is that in Tennessee the amount of marijuana is not the only factor for the jury to consider when determining if you are guilty of a felony for possessing marijuana with the intent to manufacture, deliver or sell the marijuana.

Tennessee Code Annotated 39-17-419 states that it may be inferred from the amount of a marijuana possessed by an offender, along with other relevant facts surrounding the arrest, that the marijuana was possessed with the purpose of selling or otherwise dispensing.  The statute goes on to say that it may be inferred from circumstances indicating a casual exchange among individuals of a small amount of marijuana so exchanged was possessed not with the purpose of selling. In State of Tennessee v. John Belew, 348 S.W.3d 186 (Tenn. Crim. App. 2005), the Criminal Appeals Court concluded that this statute permits the jury to draw an inference of intent to sell or deliver when the amount of the controlled substance and other relevant facts surrounding the arrest are considered together.  Therefore, the State of Tennessee must present some evidence of intent, in addition to the weight of the marijuana, to convict an individual in Tennessee.

Many felony drug cases begin with a drug detective or police officer using techniques like confidential informants, wire-taps, GPS surveillance, or various other tactics to prove that an individual is in the business of selling the illegal drug – in this case marijuana.  The government spends lots of resources, sometimes from their own task force pockets, to get the drug dealers off the street.  In cases like these, the issue is typically not whether the marijuana involved was for personal use or for resale because the amounts are much greater than an amount typically possessed for personal consumption.  Plus, the government usually has some type of proof to put before the jury relating to specific drug deals, exchanges, money laundering or other dealing activities, which would be the type of evidence needed to rebut the inference in T.C.A 39-17-419.

The cases I am addressing in this blog involve a driver or passenger who stopped in a vehicle, or individual who is found in his/her home to be in possession of an amount that a daily cannabis user would typically possess for consumption.  This could be one-half (1/2) ounce or several ounces depending on the circumstances of the individual and how much they consume. The seized evidence in cases like this would usually include one bag or even a few bags of marijuana and paraphernalia indicative of personal consumption, like pipes, rolling papers or scales.  Additionally, cannabis consumers may likely possess several different strains of cannabis, separated in several different containers, with absolutely no intention of ever selling any of the marijuana.  Although often distorted by the police, I think this is akin to someone who has several varieties of wine in their wine rack or different types of beer for different occasions.